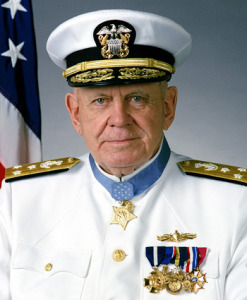 John Bulkeley was born on August 19, 1911, in New York City, New York. He entered the U.S. Naval Academy in 1929 and upon graduation in 1933 joined the U.S. Army Air Corps. Bulkeley served for a year in the Air Corps before being commissioned an Ensign in the U.S. Navy on June 19, 1934. He served as a Deck Watch Officer on the cruiser USS Indianapolis (CA-35) from July 1934 to September 1936. From December 1936 to December 1939, Bulkeley served as an Engineering Officer and later as Chief Engineer on the gunboat USS Sacramento (PG-19). His next assignment was as Watch and Division Officer on the aircraft carrier USS Saratoga (CV-3) from January 1940 to February 1941. Bulkeley then became Commander of Motor Boat Submarine Chaser Squadron 1, where he served from February to August 1941, and then took command of Motor Torpedo Boat Squadron Three, which he was commanding at the time of the Japanese Attack on Pearl Harbor. LT Bulkeley commanded MTB Squadron 3 in and around the Philippines during the Japanese invasion, and was responsible for getting General Douglas MacArthur, his family, and his staff out of Corregidor and safely through the Japanese fleet. He was assigned to the Motor Torpedo Boat Squadrons Training Center at Portsmouth, Rhode Island, in May 1942, and was then assigned as Commander of Motor Torpedo Boat Squadron 7 in October 1942, where he served until January 1944. After recovering from injuries from January to March 1944, LCDR Bulkeley was made Commander of Motor Torpedo Boat Squadron 2. He was then assigned as Commander of PT Squadron 122 from May to July 1944, where he participated in the Normandy Invasion. Bulkeley served as Commander of the destroyer USS Endicott (DD-495) from July 1944 to June 1945. After attending Destroyer Officer Training, he was made Commander of the destroyer USS Stribling (DD-867), where he served from August 1945 to June 1946. His next assignment was as an instructor at the U.S. Naval Academy from July 1946 to May 1948. From May 1948 to July 1949, CDR Bulkeley served as Executive Officer on the amphibious force command ship USS Mount Olympus (AGC-8). After attending Armed Forces Staff College at Norfolk, Virginia, he served as a staff officer and officer-in-charge of the Weapons Division on the Military Liaison Committee to the Atomic Energy Commission from January 1950 to December 1952, when he was made Commander of Destroyer Division 132. Capt Bulkeley commanded the division during the Korean War and then served on the staff of Cruiser Division 5 from October 1953 to October 1955, when he took over as Commander of Cruiser Division 5. He served in this position until January 1956, when he was assigned to the Joint Chiefs of Staff in Washington. Capt Bulkeley served on the Joint Staff until April 1959, when he became Commander of Destroyer Squadron 12. In July 1960, Bulkeley became Commanding Officer of the Clarksville Naval Base at Clarksville, Tennessee, where he served until December 1963. From December 1963 to August 1966, ADM Bulkeley commanded the U.S. Naval Base at Guantanamo Bay, Cuba. He served as Commander of Cruiser-Destroyer Flotilla 8 from August 1966 to June 1967, when he was made President of the U.S. Navy Board of Inspection and Survey. ADM Bulkeley served in this position for the next 21 years, finally retiring from the Navy on August 31, 1988. He died on April 6, 1996, and was buried at Arlington National Cemetery.

For extraordinary heroism, distinguished service and conspicuous gallantry above and beyond the call of duty, as Commander of Motor Torpedo Boat Squadron THREE, in Philippine waters during the period December 7, 1941 to April 10, 1942. The remarkable achievement of Lieutenant Bulkeley’s Command in damaging or destroying a notable number of Japanese enemy planes, surface combatant and merchant ships, and in dispersing landing parties and land based enemy forces during the four months and eight days of operation without benefit of repairs, overhaul or maintenance facilities for his Squadron, is believed to be without precedent in this type of warfare. His dynamic forcefulness and daring in offensive action, his brilliantly planned and skillfully executed attacks, supllemented by an unique resourcefulness and ingenuity, characterize him as an outstanding leader of men and a gallant and intrepid seaman. These qualities coupled with a complete disregard for his own personal safety reflect great credit upon him and the Naval Service.