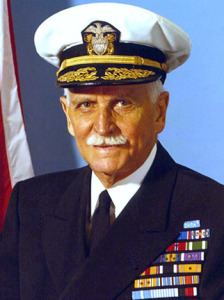 Joel Boone was born on August 29, 1889, in St. Clair, Pennsylvania. He graduated from Hahnemann Medical College in Philadelphia, Pennsylvania, in June 1913, and was commissioned a Lieutenant Junior Grade in the U.S. Navy Medical Corps in March 1914. After performing graduate studies at the U.S. Navy Medical School in Washington, D.C., Boone served in the Artillery Battalion of the U.S. Marine Corps Expeditionary Force in Haiti during 1915 and 1916. He served aboard the battleship USS Wyoming (BB-32) from April 1917 to early 1918, when he was assigned as a Surgeon with the U.S. Marine Corps’ Sixth Regiment in France during World War I. After the war, CDR Boone served with the American Red Cross in Washington, D.C., and as Director of the Bureau of Naval Affairs, before serving as Medical Officer abaord the Presidential Yacht, USS Mayflower, from June 1922 to March 1929. He next served as White House Physician to the President, from March 1929 to September 1931, when he entered the Naval Medical School for postgraduate studies. Boone served on the hospital ship Relief from 1933 to 1935, and then at San Diego Naval Base Hospital from 1935 to November 1938, when he transferred to the aircraft carrier USS Saratoga (CV-3) as the Senior Medical Officer. He became the Commanding Officer of the Naval Dispensary at Long Beach, California, in July 1939, and then became Fleet Medical Officer of Commander Base Force, U.S. Fleet, aboard the transport ship USS Argonne (AS-10) from February to December 1940. Capt Boone next served as the Senior Medical Officer at NAS San Diego, California, and then Commanded the Naval Hospital in Seattle, Washington, where he served for the majority of World War II. In April 1945, Boone became Fleet Medical Officer to the Commander, Third Fleet, and then he served as District Medical Officer, Eleventh Naval District at San Diego, California, from January 1946 to January 1948. ADM Boone was next appointed as Executive Secretary on the Secretary of Defense’s Committee on Medical and Hospital Services of the Armed Forces and later served on the Hoover Commission until March 1950, when he became Inspector General of the Medical Department. He was medically retired from the Navy on December 1, 1950, and then served as Chief Medical Director of the Veterans Administration for the next four years. Joel Boone died on April 2, 1974, and was buried at Arlington National Cemetery. The guided missile frigate USS Boone (FFG-28) was named in his honor.

For extraordinary heroism, conspicuous gallantry, and intrepidity while serving with the 6th Regiment, U.S. Marines, in actual conflict with the enemy. With absolute disregard for personal safety, ever conscious and mindful of the suffering fallen, Surgeon Boone, leaving the shelter of a ravine, went forward onto the open field where there was no protection and despite the extreme enemy fire of all calibers, through a heavy mist of gas, applied dressings and first aid to wounded marines. This occurred southeast of Vierzy, near the cemetery, and on the road south from that town. When the dressings and supplies had been exhausted, he went through a heavy barrage of large-caliber shells, both high explosive and gas, to replenish these supplies, returning quickly with a sidecar load, and administered them in saving the lives of the wounded. A second trip, under the same conditions and for the same purpose, was made by Surgeon Boone later that day.