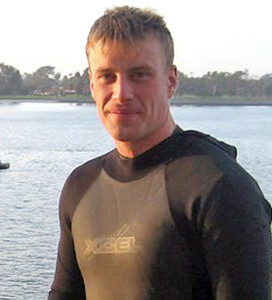 Jesse Pittman was born on April 20, 1984, in Arcata, California. After working as a firefighter for the California Department of Forestry, he enlisted in the U.S. Navy on March 17, 2005, and went on active duty to begin basic training on August 17, 2005. He completed basic training at NTC Great Lakes, Illinois, in October 2005, and then attended the Defense Information School at Fort Meade, Maryland, from October 2005 to February 2006. Petty Officer Pittman next attended Basic Underwater Demolition/SEAL training at NAB Coronado, California, from March to September 2006, followed by Jump School at Fort Benning, Georgia, in October 2007, and finally Naval Special Warfare Advanced (SEAL Qualification) training from November 2006 to April 2007. His first assignment was with SEAL Team FIVE at NAB Coronado, from April 2007 until he was killed in action when the CH-47 Chinook helicopter he was aboard was shot down in Afghanistan on August 6, 2011. During this time, Petty Officer Pittman deployed to Afghanistan in support of Operation Enduring Freedom multiple times. He also deployed to Yemen in support of Operation Iraqi Freedom in 2010 and 2011. He was buried at Fort Rosecrans National Cemetery in San Diego, California.

Petty Officer Second Class Jesse D. Pittman, United States Navy, distinguished himself by exceptionally valorous achievement as a Platoon Team Member and Afghan Partnering Unit Team Leader for a Joint Task Force in support of Operation ENDURING FREEDOM from 6 August 2009 to 30 October 2009. During this period, Petty Officer Second Class Pittman was directly responsible for the tactical and garrison actions of a local National assault team. Due to his superior leadership, their performance on numerous direct action missions resulted in the capture or elimination of numerous enemy, to include several Al Qaeda and Taliban leaders. On 11 September 2009, Petty Officer Second Class Pittman was engaged in a fierce firefight with a determined enemy. While taking effective enemy fire, he tactically led his team, directing their fire to suppress the enemy, and enabling the members of his troop to break contact and engage with close air support. The distinctive accomplishments of Petty Officer Second Class Pittman reflect great credit upon him, the United States Navy, and the Department of Defense.