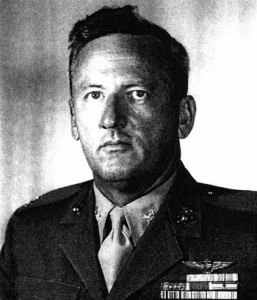 Jeff DeBlanc was born on February 15, 1921, in Lockport, Louisiana. He enlisted in the Flight Training V-5 Program of the U.S. Navy on July 29, 1941, was designated a Naval Aviator on April 11, 1942, and commissioned a 2d Lt in the U.S. Marine Corps on July 2, 1942. After receiving additional training, he joined VMF-112 at Guadalcanal in October 1942, and between November 1942 and January 1943, he was credited with destroying 8 enemy aircraft in aerial combat plus 1 probable. Capt DeBlanc joined VMF-122 in July 1943 and VMF-641 in January 1944 and served at MCAS El Toro, California, from July 1943 to October 1944, when he joined VMF-422 in the Marshall Islands. He was credited with 1 more air victory in May 1945, for a total of 9 destroyed and 1 probable for World War II. Capt DeBlanc returned to the U.S. in October 1945, left active duty on January 1, 1946, and then joined the Marine Corps Reserve. He served with the 8th Marine Corps Reserve District in New Orleans, Louisiana, from January 1946 to May 1966, and then with Headquarters Marine Corps Reserve District Kansas City, Missouri, from May 1966 until his retirement from the Marine Corps Reserve as a Colonel on July 1, 1972. Jeff DeBlanc died on November 22, 2007, and was buried at the St. Michael Cemetery in Saint Martinville, Louisiana.

For conspicuous gallantry and intrepidity at the risk of his life above and beyond the call of duty as leader of a section of 6 fighter planes in Marine Fighting Squadron 112, during aerial operations against enemy Japanese forces off Kolombangara Island in the Solomons group, 31 January 1943. Taking off with his section as escort for a strike force of dive bombers and torpedo planes ordered to attack Japanese surface vessels, 1st Lt. DeBlanc led his flight directly to the target area where, at 14,000 feet, our strike force encountered a large number of Japanese Zeros protecting the enemy’s surface craft. In company with the other fighters, 1st Lt. DeBlanc instantly engaged the hostile planes and aggressively countered their repeated attempts to drive off our bombers, persevering in his efforts to protect the diving planes and waging fierce combat until, picking up a call for assistance from the dive bombers, under attack by enemy float planes at 1,000 feet, he broke off his engagement with the Zeros, plunged into the formation of float planes and disrupted the savage attack, enabling our dive bombers and torpedo planes to complete their runs on the Japanese surface disposition and withdraw without further incident. Although his escort mission was fulfilled upon the safe retirement of the bombers, 1st Lt. DeBlanc courageously remained on the scene despite a rapidly diminishing fuel supply and, boldly challenging the enemy’s superior number of float planes, fought a valiant battle against terrific odds, seizing the tactical advantage and striking repeatedly to destroy 3 of the hostile aircraft and to disperse the remainder. Prepared to maneuver his damaged plane back to base, he had climbed aloft and set his course when he discovered 2 Zeros closing in behind. Undaunted, he opened fire and blasted both Zeros from the sky in a short, bitterly fought action which resulted in such hopeless damage to his own plane that he was forced to bail out at a perilously low altitude atop the trees on enemy-held Kolombangara. A gallant officer, a superb airman, and an indomitable fighter, 1st Lt. DeBlanc had rendered decisive assistance during a critical stage of operations, and his unwavering fortitude in the face of overwhelming opposition reflects the highest credit upon himself and adds new luster to the traditions of the U.S. Naval Service.