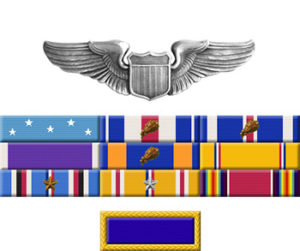 Jay Zeamer was born on July 25, 1918, in Carlisle, Pennsylvania. He was commissioned a 2d Lt of Infantry in the U.S. Army Reserve through the Army ROTC program at the Massachusetts Institute of Technology in 1939, and graduated from MIT and went on active duty beginning in June 1940. After serving for 2 months at Fort Dix, New Jersey, Lt Zeamer resigned his active duty commission to enlist in the Aviation Cadet Program of the U.S. Army Air Corps on August 2, 1940, earning his pilot wings and commission as a 2d Lt in the U.S. Army Air Corps at Maxwell Field, Alabama, in March 1941. His first assignment was as a B-26 Marauder pilot and flight test engineer with the 22nd Bomb Group and then the 19th Bomb Squadron at Langley Field, Virginia, from March 1941 to December 1941, and then flying anti-submarine patrols out of Muroc Field, California, from December 1941 to January 1942. Lt Zeamer deployed with his unit to Australia in March 1942, and transferred to the 43rd Bomb Group flying B-17 Flying Fortress bombers and serving as an intelligence officer out of New Guinea in September 1942. Capt Zeamer began flying with the 65th Bomb Squadron of the 43rd Bomb Group in New Guinea in April 1943, and he was badly injured during a photographic reconnaissance mission on June 16, 1943, for which he would later be awarded the Medal of Honor. He was hospitalized at Walter Reed General Hospital in Washington, D.C., until September 1944, and then served as a Tactical Field Air Inspector at Mitchel Field, New York, from September 1944 until he was medically retired from the Army Air Forces as a Lieutenant Colonel on January 18, 1945. After the war he completed his master’s degree in aeronautical engineering at MIT in 1946, and then worked in the aerospace industry until his retirement in 1968. Jay Zeamer died on March 22, 2007, and was buried at Arlington National Cemetery.

On 16 June 1943, Maj. Zeamer (then Capt.) volunteered as pilot of a bomber on an important photographic mapping mission covering the formidably defended area in the vicinity of Buka, Solomon Islands. While photographing the Buka airdrome. his crew observed about 20 enemy fighters on the field, many of them taking off. Despite the certainty of a dangerous attack by this strong force, Maj. Zeamer proceeded with his mapping run, even after the enemy attack began. In the ensuing engagement, Maj. Zeamer sustained gunshot wounds in both arms and legs, 1 leg being broken. Despite his injuries, he maneuvered the damaged plane so skillfully that his gunners were able to fight off the enemy during a running fight which lasted 40 minutes. The crew destroyed at least 5 hostile planes, of which Maj. Zeamer himself shot down 1. Although weak from loss of blood, he refused medical aid until the enemy had broken combat. He then turned over the controls, but continued to exercise command despite lapses into unconsciousness, and directed the flight to a base 580 miles away. In this voluntary action, Maj. Zeamer, with superb skill, resolution, and courage, accomplished a mission of great value.