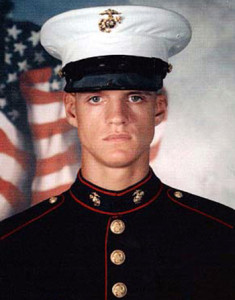 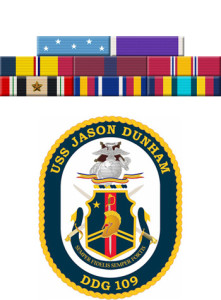 Jason Dunham was born on the Marine Corps birthday, November 10, 1981, in Wellsville, New York. He enlisted in the U.S. Marine Corps Reserve on August 18, 1999, and went on active duty beginning July 31, 2000. After completing basic training, he was trained as a Security Force Sentry where he served at Naval Submarine Base Kings Bay, Georgia, before being assigned to 4th Platoon, Company K in the 3rd Battalion of the 7th Marine Regiment at Twentynine Palms, California. He was mortally wounded when an insurgent dropped a grenade near him and he threw himself on it to save his men on April 14, 2004. CPL Dunham died 8 days later, on April 22, 2004, and was buried at Fairlawn Cemetery in Scio, New York. The guided missile destroyer USS Jason L. Dunham (DDG-109) was named in his honor.

For conspicuous gallantry and intrepidity at the risk of his life above and beyond the call of duty while serving as a Rifle Squad Leader, 4th Platoon, Company K, Third Battalion, Seventh Marines (Reinforced), Regimental Combat Team 7, First Marine Division (Reinforced), on 14 April 2004. Corporal Dunham’s squad was conducting a reconnaissance mission in the town of Karabilah, Iraq, when they heard rocket-propelled grenade and small arms fire erupt approximately two kilometers to the west. Corporal Dunham led his Combined Anti-Armor Team towards the engagement to provide fire support to their Battalion Commander’s convoy, which had been ambushed as it was traveling to Camp Husaybah. As Corporal Dunham and his Marines advanced, they quickly began to receive enemy fire. Corporal Dunham ordered his squad to dismount their vehicles and led one of his fire teams on foot several blocks south of the ambushed convoy. Discovering seven Iraqi vehicles in a column attempting to depart, Corporal Dunham and his team stopped the vehicles to search them for weapons. As they approached the vehicles, an insurgent leaped out and attacked Corporal Dunham. Corporal Dunham wrestled the insurgent to the ground and in the ensuing struggle saw the insurgent release a grenade. Corporal Dunham immediately alerted his fellow Marines to the threat. Aware of the imminent danger and without hesitation, Corporal Dunham covered the grenade with his helmet and body, bearing the brunt of the explosion and shielding his Marines from the blast. In an ultimate and selfless act of bravery in which he was mortally wounded, he saved the lives of at least two fellow Marines. By his undaunted courage, intrepid fighting spirit, and unwavering devotion to duty, Corporal Dunham gallantly gave his life for his country, thereby reflecting great credit upon himself and upholding the highest traditions of the Marine Corps and the United States Naval Service.