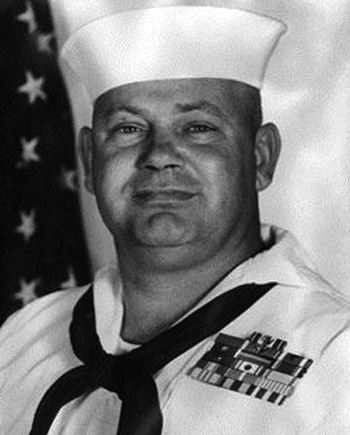 Elliott Williams was born on November 13, 1930, in Fort Mill, South Carolina. He enlisted in the U.S. Navy on August 8, 1947, and completed basic training at NTC San Diego, California, in November 1947. His first assignment was at Amphibious Base Coronado, California, and aboard the tank landing ship USS LST-1123 (later named the USS Sedgwick County), from December 1947 to July 1950, followed by service at Receiving Station San Francisco, California, from July to November 1950. Williams served aboard the destroyer USS Douglas H. Fox (DD-779) from November 1950 to July 1952, with service in Korea from March to June 1952. His next assignment was to Receiving Station Charleston, South Carolina, from July 1952 to September 1954, and then aboard the dock landing ship USS Thomaston (LSD-28) from September 1954 to July 1956. He served at Receiving Station San Diego, California, from July to September 1956, followed by service aboard the minesweeper USS Direct (MSO-430) from September 1956 to December 1957. PO Williams next served with Air Transport Squadron SIX (VR-6) at McGuire AFB, New Jersey, from December 1957 to January 1960, and then served at the Fleet Training Center before serving aboard the light cruiser USS Little Rock (CLG-4) from June 1960 to March 1963. His next assignment was aboard the fleet oiler USS Chukawan (AO-100) from April 1963 to March 1965, followed by service aboard the repair ship USS Amphion (AR-13) from March 1965 to November 1965. He served aboard the cargo ship USS Alcor (AK-259) from November 1965 until he deployed to Southeast Asia in May 1966. BM1 Williams served with River Squadron FIVE where he served as a boat captain and patrol officer aboard River Patrol Boat 105 (PBR-105) from May 1966 to early 1967. He retired from the U.S. Navy on April 26, 1967, and later served as a U.S. Marshal from 1969 to 1989 . He became the first Law Enforcement Officer in history allowed to enter the Soviet Union to pick up a prisoner for return to the United States in 1975. Elliott Williams died on October 13, 1999, and was buried at the Florence National Cemetery in Florence, South Carolina. The guided-missile destroyer USS James E. Williams (DDG-95) was named in his honor on June 28, 2003.

For conspicuous gallantry and intrepidity at the risk of his life above and beyond the call of duty as a member of River Section 531 during combat operations on the Mekong River in the Republic of Vietnam. On 31 October 1966, Petty Officer Williams was serving as Boat Captain and Patrol Officer aboard River Patrol Boat (PBR) 105 accompanied by another patrol boat when the patrol was suddenly taken under fire by two enemy sampans. Petty Officer Williams immediately ordered the fire returned, killing the crew of one enemy boat and causing the other sampan to take refuge in a nearby river inlet. Pursuing the fleeing sampan, the U.S. patrol encountered a heavy volume of small arms fire from enemy forces, at close range, occupying well-concealed positions along the river bank. Maneuvering through this fire, the patrol confronted a numerically superior enemy force aboard two enemy junks and eight sampans augmented by heavy automatic weapons fire from ashore. In the savage battle that ensued, Petty Officer Williams, with utter disregard for his own safety, exposed himself to the withering hail of enemy fire to direct counter-fire and inspire the actions of his patrol. Recognizing the overwhelming strength of the enemy force, Petty Officer Williams deployed his patrol to await the arrival of armed helicopters. In the course of this movement he discovered an even larger concentration of enemy boats. Not waiting for the arrival of the armed helicopters, he displayed great initiative and boldly led the patrol through the intense enemy fire and damaged or destroyed fifty enemy sampans and seven junks. This phase of the action completed, and with the arrival of the armed helicopters, Petty Officer Williams directed the attack on the remaining enemy force. Now virtually dark, and although Petty Officer Williams was aware that his boats would become even better targets, he ordered the patrol boats’ search lights turned on to better illuminate the area and moved the patrol perilously close to shore to press the attack. Despite waning supply of ammunition the patrol successfully engaged the enemy ashore and completed the rout of the enemy force. Under the leadership of Petty Officer Williams, who demonstrated unusual professional skill and indomitable courage throughout the three hour battle, the patrol accounted for the destruction or loss of sixty-five enemy boats and inflicted numerous casualties on the enemy personnel. His extraordinary heroism and exemplary fighting spirit in the face of grave risks inspired the efforts of his men to defeat a larger enemy force, and are in keeping with the finest traditions of the United States Naval Service.