You are here: Home › Tributes › #imnohero: James A. Lovell, Captain, US Navy 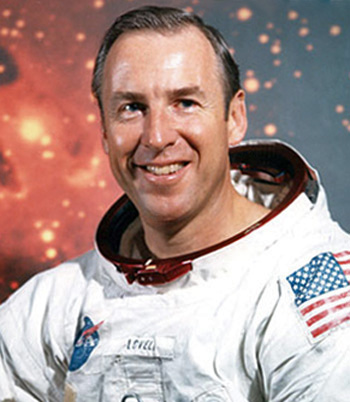 Jim Lovell was born on March 25, 1928, in Cleveland, Ohio. He enlisted in the U.S. Naval Reserve on May 22, 1946, served on active duty from February to June 1948, and then left the reserves to enter the U.S. Naval Academy on June 6, 1948. He graduated from the Naval Academy and was commissioned an Ensign in the U.S. Navy on June 6, 1952, and then remained at the Academy as a Seamanship Instructor from June to October 1952. LtJg Lovell next completed flight training and was designated a Naval Aviator on February 1, 1954, followed by service as an F4D Skyray and F3H Demon pilot with VC-3 and attached to VF(AW)-3 at NAS North Island and NAS Moffett Field, California, from February 1954 to January 1958. After completing Navy Test Pilot School, Lt Lovell served as a Project Test Pilot at NATC Patuxent River, Maryland, until June 1961, when he transferred to VF-101 at NAS Oceana, Virginia, serving as an F-4 Phantom II Instructor Pilot until October 1962. LCDR Lovell was selected as a NASA Astronaut in the 2nd Astronaut Group in September 1962, and he served as backup pilot for Gemini 4 before going into space as pilot on Gemini 7 from December 4-18, 1965. CDR Lovell served as backup Commander for Gemini 9, and then flew into space for a second time as Commander of Gemini 12, the last Gemini mission, from November 11-15, 1966. He next served as Command Module Pilot and Navigator for Apollo 8, man’s maiden voyage to the moon, from December 21-27, 1968, and then served as Spacecraft Commander for Apollo 13 from April 11-17, 1970. Capt Lovell retired from NASA and the U.S. Navy on March 1, 1973.