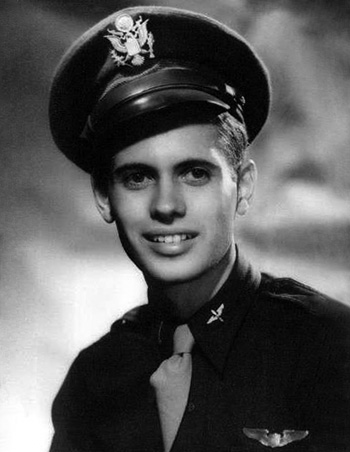 Jack Bade was born on October 9, 1920, in Minneapolis, Minnesota. He entered the Aviation Cadet Program of the U.S. Army Air Forces on January 5, 1942, and was commissioned a 2d Lt and awarded his pilot wings at Luke Field, Arizona, on July 26, 1942. After completing advanced fighter training, he was assigned to the 44th Fighter Squadron of the 18th Fighter Group in the Pacific in December 1942. Lt Bade was credited with destroying 5 enemy aircraft in aerial combat plus 1 probable before returning to the U.S. in September 1943. He served as an instructor pilot until leaving active duty at the end of the war. Jack Bade became a test pilot for Republic Aviation after the war, and was killed in an aircraft collision while flying an F-105D Thunderchief on May 2, 1963. He is buried at the Long Island National Cemetery in Farmingdale, New York.

The President of the United States takes pleasure in presenting the Distinguished Service Cross to Jack A. Bade, Second Lieutenant (Air Corps), U.S. Army Air Forces, for extraordinary heroism in connection with military operations against an armed enemy while serving as Pilot of a P-40 Fighter Airplane in the 44th Fighter Squadron, 18th Fighter Group, THIRTEENTH Air Force, in aerial combat against enemy forces on 13 February 1943, in the Southwest Pacific Theater of Operations. While leading part of a fighter sweep preceding a bombing raid on hostile shipping in the Shortland-Kahili area, First Lieutenant Bade fought back desperately against intercepting Zeros which struck from behind and below. When his crippled wingman fell off in a smoking dive, he followed him down until his own plane was tailed by four Japanese fighters whose disintegrating fire riddled his wings and fuselage and jammed his guns. Immediately afterward, although bleeding profusely from a deep head wound, he flew to the defense of several of our bombers which had been stripped of fighter cover and were being attacked by a swarm of Zeros. Undeterred by complete lack of fire power and suffering great pain, he put his damaged plane through a series of headlong passes with such formidable aggressiveness that the Japanese airmen broke off their fight and fled. His heroic perseverance and superb flying skill were in keeping with the highest traditions of the United States Naval Service.