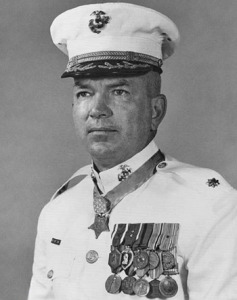 Henry Commiskey was born on January 10, 1927, in Hattiesburg, Mississippi. He enlisted in the U.S. Marine Corps on January 19, 1944, and after completing basic training was assigned to 3rd Battalion, 27th Marine Regiment, in March 1944. PFC Commiskey deployed to the Pacific with his unit in early 1945, and was wounded during the Battle of Iwo Jima in February 1945. He returned to the U.S. in August 1945, and then served with 3rd Battalion, 2nd Marine Regiment, on occupation duty in Japan from December 1945 to February 1946, followed by service with 1st Battalion, 2nd Marines, at Camp Lejeune, North Carolina, from February to April 1946. CPL Commiskey left active duty on May 6, 1946, and then reenlisted in the Marines on July 3, 1946, serving as a Drill Instructor at Parris Island, South Carolina, until September 1949. He was then accepted for officer training, and was commissioned a 2d Lt in the Marine Corps on September 10, 1949, followed by The Basic School at MCS Quantico, Virginia, from September 1949 to June 1950. Lt Commiskey remained at The Basic School as an instructor until July 1950, and then deployed to Korea with C Company, 1st Battalion, 1st Marine Regiment, where he served until being wounded and evacuated back to the U.S. in December 1950. During this time, Lt Commiskey participated in the Inchon Landing, the Battle of Seoul, and the Battle of Chosin Reservoir. After recovering from his injuries, he served as a Supply Officer at the Naval Air Rocket Test Station in Dover, New Jersey, from March to September 1951. Lt Commiskey then attended flight training, and was designated a Naval Aviator at NAS Corpus Christi, Texas, in June 1953. His first flying assignment was with VMAT-10 at MCAS El Toro, California, from August 1953 to March 1954, followed by service with VMA-212 in South Korea from April to November 1954. Capt Commiskey then left flight status and served with Headquarters & Service Company, 1st Service Regiment of the 1st Marine Division in South Korea from December 1954 to August 1956. His next assignment was as Officer in Charge of Marine Corps Recruiting Station Jackson, Mississippi, from October 1956 to July 1959, followed by The Junior Course at MCS Quantico from August 1959 to June 1960. Maj Commiskey next served as an instructor, company commander, and Executive Officer at The Basic School at Quantico from June 1960 to August 1963, and then served as Executive Officer of the Ordnance School at Quantico from August 1963 until his retirement from the Marine Corps on September 1, 1966. Henry Commiskey died on August 15, 1971, and his cremated remains were scattered in the Gulf of Mexico between Gulfport and Biloxi, Mississippi.

For conspicuous gallantry and intrepidity at the risk of his life above and beyond the call of duty while serving as a Platoon Leader in Company C, First Battalion, First Marines, First Marine Division (Reinforced), in action against enemy aggressor forces near Yongdungp’o, Korea, on 20 September 1950. Directed to attack hostile forces well dug in on Hill 85, First Lieutenant Commiskey, then Second Lieutenant, spearheaded the assault, charging up the steep slopes on the run. Coolly disregarding the heavy enemy machine-gun and small-arms fire, he plunged on well forward of the rest of his platoon and was the first man to reach the crest of the objective. Armed only with a pistol, he jumped into a hostile machine-gun emplacement occupied by five enemy troops and quickly disposed of four of the soldiers with his automatic pistol. Grappling with the fifth, First Lieutenant Commiskey knocked him to the ground and held him until he could obtain a weapon from another member of his platoon and kill the last of the enemy gun crew. Continuing his bold assault, he moved to the next emplacement, killed two more of the enemy and then led his platoon toward the rear nose of the hill to rout the remainder of the hostile troops and destroy them as they fled from their positions. His valiant leadership and courageous fighting spirit served to inspire the men of his company to heroic endeavor in seizing the objective and reflect the highest credit upon First Lieutenant Commiskey and the United States Naval Service.