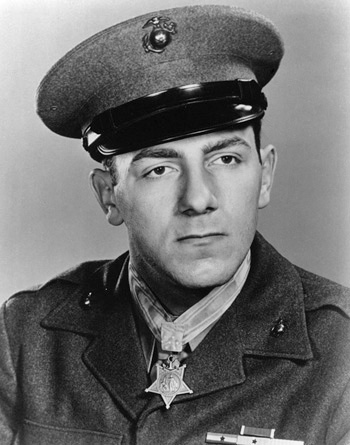 Hector Cafferata was born on November 4, 1929, in New York City, New York. He enlisted in the U.S. Marine Corps Reserve on February 15, 1948, and served with the 21st Infantry Battalion at Dover, New Jersey, until being activated on September 7, 1950. PFC Cafferata departed the U.S. in October 1950, and landed at Wonson, South Korea, in November 1950, where he served with Company F, 2nd Battalion, 7th Marines, 1st Marine Division until he was badly wounded during the Battle of Chosin Reservoir on November 28, 1950. He was evacuated to Japan in December 1950, and to U.S. Naval Base Brooklyn, New York, in January 1951, where he recuperated until being medically retired from the Marine Corps on September 1, 1951.
His Medal of Honor Citation reads:For conspicuous gallantry and intrepidity at the risk of his life above and beyond the call of duty while serving as a rifleman with Company F, in action against enemy aggressor forces. When all the other members of his fire team became casualties, creating a gap in the lines, during the initial phase of a vicious attack launched by a fanatical enemy of regimental strength against his company’s hill position, Pvt. Cafferata waged a lone battle with grenades and rifle fire as the attack gained momentum and the enemy threatened penetration through the gap and endangered the integrity of the entire defensive perimeter. Making a target of himself under the devastating fire from automatic weapons, rifles, grenades, and mortars, he maneuvered up and down the line and delivered accurate and effective fire against the onrushing force, killing 15, wounding many more, and forcing the others to withdraw so that reinforcements could move up and consolidate the position. Again fighting desperately against a renewed onslaught later that same morning when a hostile grenade landed in a shallow entrenchment occupied by wounded marines, Pvt. Cafferata rushed into the gully under heavy fire, seized the deadly missile in his right hand and hurled it free of his comrades before it detonated, severing part of 1 finger and seriously wounding him in the right hand and arm. Courageously ignoring the intense pain, he staunchly fought on until he was struck by a sniper’s bullet and forced to submit to evacuation for medical treatment Stouthearted and indomitable, Pvt. Cafferata, by his fortitude, great personal valor, and dauntless perseverance in the face of almost certain death, saved the lives of several of his fellow marines and contributed essentially to the success achieved by his company in maintaining its defensive position against tremendous odds. His extraordinary heroism throughout was in keeping with the highest traditions of the U.S. Naval Service.