Joe Bauer was born on November 20, 1908, in Woodruff, Kansas. He entered the U.S. Naval Academy in 1926 and was commissioned a 2d Lt in the U.S. Marine Corps on June 5, 1930, followed by Officers Basic School at Quantico, Virginia. Lt Bauer was next assigned to the 1st Battalion, 6th Marines, until June 1932, and he then served at the U.S. Naval Academy. He then served at Naval Base San Diego, California, and was Executive Officer of the Marine Detachment aboard the heavy cruiser USS San Francisco (CA-38) until December 1934, when he entered flight training at NAS Pensacola, Florida. Bauer was designated a Naval Aviator in February 1936, and then served with VO-7M, VMF-1, and VMF-2, before becoming Executive Officer of VMF-221 in July 1941. He deployed with the squadron to Hawaii in December 1941, took command of VMF-211 in February 1942, and became commander of VMF-212 in March 1942. Col Bauer was credited with destroying 11 enemy aircraft in aerial combat plus 1 probable before being killed in action at Guadalcanal on November 14, 1942. The destroyer escort USS Bauer (DE-1025) was named in his honor in 1957. His remains were never found.

For extraordinary heroism and conspicuous courage as Commander of a Marine Fighting Squadron in the South Pacific Area during the period May 10 to November 14, 1942. Volunteering to pilot a fighter plane in defense of our positions on Guadalcanal, Solomon Islands, Lieutenant Colonel Bauer participated in two air battles against enemy bombers and fighters outnumbering our force more than two-to-one, boldly engaged the enemy and destroyed one Japanese bomber in the engagement of September 28 and shot down four enemy fighter planes in flames on October 3, leaving a fifth smoking badly. After successfully leading twenty-six planes on an over-water ferry flight of more than six hundred miles on October 16, Lieutenant Colonel Bauer, while circling to land, sighted a squadron of enemy planes attacking the U.S.S. McFARLAND. Undaunted by the formidable opposition and with valor above and beyond the call of duty, he engaged the entire squadron and, although alone and his fuel supply nearly exhausted, fought his plane so brilliantly that four of the Japanese planes were destroyed before he was forced down by lack of fuel. His intrepid fighting spirit and distinctive ability as a leader and an airman, exemplified in his splendid record of combat achievement, were vital factors in the successful operations in the South Pacific Area. 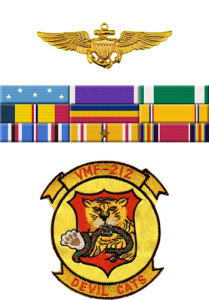