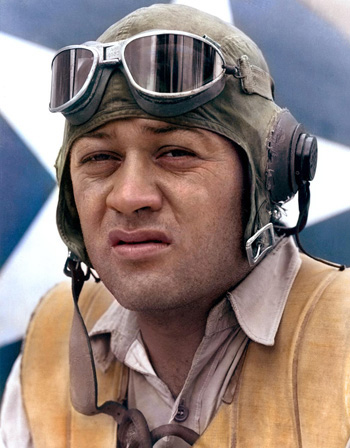 Greg Boyington was born on December 4, 1912, in Coeur d’Alene, Idaho. He graduated with a bachelor of science degree in Aeronautical Engineering from the University of Washington and was commissioned a 2d Lt in the U.S. Army Coast Artillery Reserve through the school’s ROTC program in June 1934. Boyington transferred to the U.S. Marine Corps Reserve on June 13, 1935, and entered flight training on February 18, 1936. He was designated a Naval Aviator on March 11, 1937, and then served with the Fleet Marine Force before attending the Basic School in Philadelphia, Pennsylvania, from July 1938 to January 1939. Lt Boyington then served with the 2nd Marine Aircraft Group at NAS San Diego, California, until November 1940, when he transferred to NAS Pensacola, Florida, as a flight instructor. On August 26, 1941, he resigned his commission and joined the American Volunteer Group (Flying Tigers) in Burma. He was officially credited with destroying 2 enemy aircraft in aerial combat, plus 2.5 on the ground while strafing enemy airfields, before returning to the U.S. in April 1942. Boyington rejoined the Marine Corps on September 29, 1942, and deployed to the South Pacific in early 1943, serving as Executive Officer of VMF-121 at Guadalcanal until April 1943, as commander of VMF-122 from April to June 1943, and as commander of VMF-112 from July to August 1943. Maj Boyington took command of VMF-214, the Black Sheep, in September 1943 and was credited with destroying another 22 enemy aircraft in aerial combat plus 4 probables before being shot down and taken as a Prisoner of War on January 3, 1944. He is credited by most groups with 24 air victories (2 with the AVG, 22 with the Marine Corps), but he is credited with 28 total air victories by the U.S. Marine Corps (6 with the AVG, 22 with the Marine Corps). After being released from his POW camp in Tokyo on August 29, 1945, he returned to the U.S. and was presented the Medal of Honor that was awarded to him after he was shot down. He made a Victory Bond Tour and then served with Marine Air West Coast at Marine Corps Air Depot Miramar, California, until he retired from the Marine Corps on August 1, 1947. Pappy Boyington published his autobiography, “Baa Baa Black Sheep”, in 1958, and died on January 11, 1988. He is buried at Arlington National Cemetery.

For extraordinary heroism and valiant devotion to duty as commanding officer of Marine Fighting Squadron 214 in action against enemy Japanese forces in the Central Solomons area from 12 September 1943 to 3 January 1944. Consistently outnumbered throughout successive hazardous flights over heavily defended hostile territory, Maj. Boyington struck at the enemy with daring and courageous persistence, leading his squadron into combat with devastating results to Japanese shipping, shore installations, and aerial forces. Resolute in his efforts to inflict crippling damage on the enemy, Maj. Boyington led a formation of 24 fighters over Kahili on 17 October and, persistently circling the airdrome where 60 hostile aircraft were grounded, boldly challenged the Japanese to send up planes. Under his brilliant command, our fighters shot down 20 enemy craft in the ensuing action without the loss of a single ship. A superb airman and determined fighter against overwhelming odds, Maj. Boyington personally destroyed 26 of the many Japanese planes shot down by his squadron and, by his forceful leadership, developed the combat readiness in his command which was a distinctive factor in the Allied aerial achievements in this vitally strategic area. 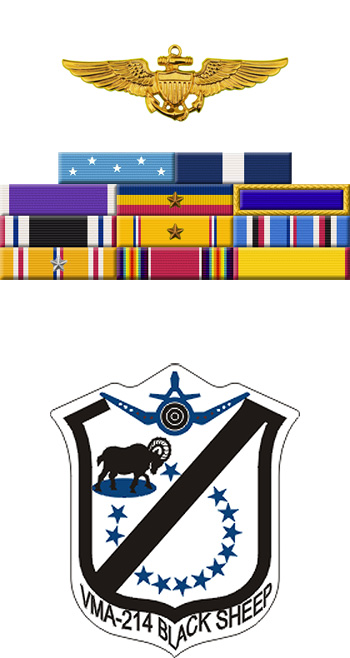