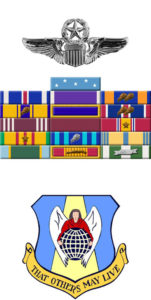 Gerald Young was born on May 19, 1930, in Chicago, Illinois. He enlisted in the U.S. Navy on May 24, 1947, and was trained as an Aviation Electrician’s Mate. Young received an honorable discharge from the Navy on February 29, 1952, but re-enlisted in the Navy on August 6, 1955, serving until July 15, 1956, when he was accepted into the U.S. Air Force Aviation Cadet program. Young was commissioned a 2Lt and awarded his pilot wings on January 18, 1958. After helicopter training, Lt Young’s first assignment was as a helicopter pilot where he flew missions in support of the atomic tests being conducted in the Marshall Islands from July to December 1958. He served in Japan from December 1958 to January 1960, and after further training he was assigned to the 566th Strategic Missile Squadron at F.E. Warren AFB, Wyoming. From June 1962 to November 1963, Young served with the 96th Strategic Aerospace Wing at Dyess AFB, Texas. He then transferred to Barksdale AFB, Louisiana, where he served until October 1965. Young next flew with the 381st Strategic Missile Wing at McConnell AFB, Kansas, from October 1965 to August 1967, when he was sent to Southeast Asia to fly with the 37th Aerospace Rescue & Recovery Squadron out of Da Nang AB, Republic of Vietnam. Capt Young was seriously injured during a rescue attempt in November 1967, during a mission in which he would later be awarded the Medal of Honor. After returning from Vietnam in November 1967 and three months of hospitalization, Capt Young was assigned to the 3637th Flying Training Squadron at Sheppard AFB, Texas, where he served from February 1968 to August 1969. He then served with the 3253rd PTSq at Peterson Field, Colorado, from August 1969 to February 1971, when he was assigned to the 42nd Aerospace Rescue & Recovery Squadron at Fairchild AFB, Washington. Major Young went to Panama in December 1972 to help the Panamanian Air Force establish a rescue program. He then served at Andrews AFB, Maryland, where he completed his B.A. degree at the University of Maryland. He next served as air attache to Colombia before serving as the Assistant Chief, Combat Plans, for the 507th Tactical Air Control Center Squadron at Shaw AFB, South Carolina, from December 1979 until his retirement from the Air Force on June 30, 1980. Col Young wears Command Pilot Wings and accumulated over 3,000 flying hours in helicopters during his Air Force career. He also flew 60 combat missions in the HH-3E “Jolly Green Giant” during the Vietnam War. LtCol Gerald O. Young died of a brain tumor on June 6, 1990. He is buried at Arlington National Cemetery.

For conspicuous gallantry and intrepidity at the risk of his life above and beyond the call of duty. Capt. Young distinguished himself while serving as a helicopter rescue crew commander. Capt. Young was flying escort for another helicopter attempting the night rescue of an Army ground reconnaissance team in imminent danger of death or capture. Previous attempts had resulted in the loss of 2 helicopters to hostile ground fire. The endangered team was positioned on the side of a steep slope which required unusual airmanship on the part of Capt. Young to effect pickup. Heavy automatic weapons fire from the surrounding enemy severely damaged 1 rescue helicopter, but it was able to extract 3 of the team. The commander of this aircraft recommended to Capt. Young that further rescue attempts be abandoned because it was not possible to suppress the concentrated fire from enemy automatic weapons. With full knowledge of the danger involved, and the fact that supporting helicopter gunships were low on fuel and ordnance, Capt. Young hovered under intense fire until the remaining survivors were aboard. As he maneuvered the aircraft for takeoff, the enemy appeared at point-blank range and raked the aircraft with automatic weapons fire. The aircraft crashed, inverted, and burst into flames. Capt. Young escaped through a window of the burning aircraft. Disregarding serious burns, Capt. Young aided one of the wounded men and attempted to lead the hostile forces away from his position. Later, despite intense pain from his burns, he declined to accept rescue because he had observed hostile forces setting up automatic weapons positions to entrap any rescue aircraft. For more than 17 hours he evaded the enemy until rescue aircraft could be brought into the area. Through his extraordinary heroism, aggressiveness, and concern for his fellow man, Capt. Young reflected the highest credit upon himself, the U.S. Air Force, and the Armed Forces of his country.