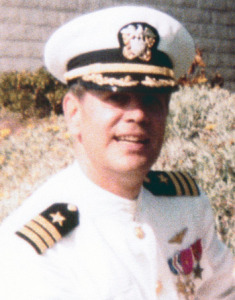 Chuck Baldock was born in 1939 in Dayton, Ohio. He enlisted in the U.S. Navy on May 27, 1960, and was trained as a Sonar Operator. He served as a Sonarman aboard the destroyer USS Bausell (DD-845) from February to June 1961, and then attended the Naval Aviation Training Program, receiving his commission as an Ensign in August 1962, and his designation as a Naval Aviator at NAS Kingsville, Texas, in March 1963. After completing Nuclear Biological Chemical Defense (NBCD) training at Fort McClellan, Alabama, he attended A-4 Skyhawk Replacement Air Group training with VA-125 at NAS Lemoore, California, from May to November 1963. Ens Baldock then served as an A-4 pilot with VA-94 at NAS Lemoore starting in November 1963. He deployed to Southeast Asia with VA-94 aboard the aircraft carrier USS Ranger (CVA-61) from August 1964 to May 1965, and then aboard USS Enterprise (CVAN-65) from October 1965 until he was forced to eject over North Vietnam and was taken as a Prisoner of War on March 17, 1966. After spending 2,525 days in captivity, LCDR Baldock was released from captivity during Operation Homecoming on February 12, 1973. He was briefly hospitalized to recover from his injuries at the Naval Hospital in San Diego, California, and then served as an instrument flight instructor with VA-126 at NAS Miramar, California, from September 1973 to August 1974. CDR Baldock next attended the University of California to complete his bachelor’s degree in Political Science from September 1974 to June 1976, and then Human Resource Management School at NAS Memphis, Tennessee, from June to September 1976. His final assignment was with the Human Resource Management Center at NTC San Diego, California, from October 1976 until his retirement from the Navy on December 1, 1980.

For conspicuous gallantry and intrepidity while interned as a Prisoner of War in North Vietnam. In October 1966, his captors, completely ignoring international agreements, subjected him to extreme mental and physical cruelties in an attempt to obtain military information and false confessions for propaganda purposes. Through his resistance to those brutalities, he contributed significantly toward the eventual abandonment of harsh treatment by the North Vietnamese, which was attracting international attention. By his determination, courage, resourcefulness, and devotion to duty, he reflected great credit upon himself and upheld the highest traditions of the Naval Service and the United States Armed Forces. 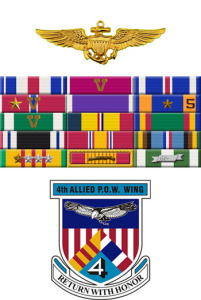