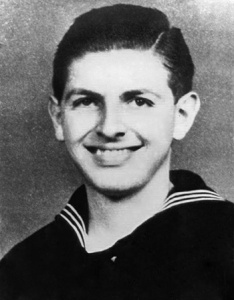 Edward Benfold was born on January 15, 1931, on Staten Island, New York. He enlisted in the U.S. Navy on June 27, 1949, and after completing basic training and Navy Hospital Corpsman training, he attended the Field Medical Service School at Camp Lejeune, North Carolina, from July to September 1951. HM3 Benfold then served as a Hospital Corpsman with 3rd Battalion, 3rd Marine Regiment, 3rd Marine Division at Camp Pendleton, California, from September 1951 to March 1952, followed by service with 1st Battalion, 3rd Marine Regiment, 3rd Marine Division at Camp Pendleton from March to July 1952. After additional training at the Field Medical Training Battalion at Camp Pendleton, he deployed to Korea with the 1st Marine Division and was killed in action on September 5, 1952. Edward Benfold was buried at the Beverly National Cemetery in Beverly, New Jersey. The Arleigh Burke class guided-missile destroyer USS Benfold (DDG-65) was named in his honor.

For gallantry and intrepidity at the risk of his life, above and beyond the call of duty and without detriment to the mission of the unit of which he was a member in combat with the enemy in KOREA on 5 September 1952. Serving as a company corpsman, Hospital Corpsman Third Class BENFOLD displayed incredible courage and devotion to duty when the company was subjected to heavy artillery and mortar barrages, followed by a determined assault by an estimated battalion strength enemy. With complete disregard for his personal safety, he moved from position to position, treating the wounded and offering words of encouragement. Later, the platoon area in which he was working received numerous attacks form both front and rear. Despite the intense enemy fire, he left the protection of his position and moved to the exposed ridgeline where he saw two Marines in a large crater. He unhesitatingly moved down into the crater to determine the condition of the men but as he approached them, an enemy soldier threw two grenades into the position while two other enemy charged. Displaying unparalleled valor, he picked up a grenade in each hand and hurled himself against the two charging enemy. Pushing the grenades against their chests, he killed the two attackers, thereby saving the lives of his comrades. In committing this act of selfless devotion to his fellow men, he was mortally wounded, gallantly giving his life for his country. Hospital Corpsman Third Class BENFOLD’s outstanding courage and disregard of his personal safety were an inspiration to all who observed him. His incredible heroism was in keeping with the highest traditions of the United States Naval Service.