You are here: Home › Tributes › #imnohero: Douglas A. Munro, USCG, Medal of Honor 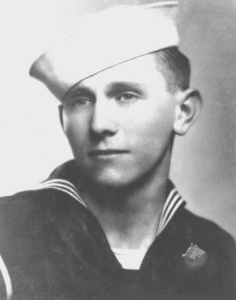 Douglas Munro was born on October 11, 1919, in Vancouver, Canada, to American parents who were temporarily residing in Canada at the time, and was made a citizen of the United States in 1922. He enlisted in the U.S. Coast Guard on September 18, 1939, and was trained as a Coast Guard Signalman. Munro was serving on the USS McCawley when he was killed in action on September 27, 1942, during the September Matanikau action in the Guadalcanal campaign of World War II. Douglas Munro became the only person in U.S. Coast Guard history to be awarded the Medal of Honor, when it was posthumously presented to him for actions the day he died.

For extraordinary heroism and conspicuous gallantry in action above and beyond the call of duty as Officer-in-Charge of a group of Higgins boats, engaged in the evacuation of a Battalion of Marines trapped by enemy Japanese forces at Point Cruz, Guadalcanal, on September 27, 1942. After making preliminary plans for the evacuation of nearly 500 beleaguered Marines, Munro, under constant risk of his life, daringly led five of his small craft toward the shore. As he closed the beach, he signalled the others to land, and then in order to draw the enemy’s fire and protect the heavily loaded boats, he valiantly placed his craft with its two small guns as a shield between the beachhead and the Japanese. When the perilous task of evacuation was nearly completed, Munro was killed by enemy fire, but his crew, two of whom were wounded, carried on until the last boat had loaded and cleared the beach. By his outstanding leadership, expert planning, and dauntless devotion to duty, he and his courageous comrades undoubtedly saved the lives of many who otherwise would have perished. He gallantly gave up his life in defense of his country.