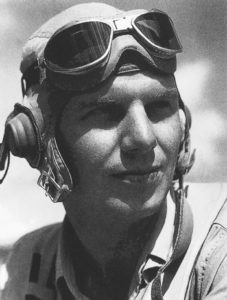 Don Aldrich was born on October 24, 1917, in Moline, Illinois. He joined the Royal Canadian Air Force in February 1941, receiving his pilot wings in November 1941. Aldrich served as an instructor pilot in Canada before receiving a commission as a 2d Lt in the U.S. Marine Corps on May 14, 1942. Capt Aldrich flew three tours with VMF-215 in the Solomons, and was credited with the destruction of 20 enemy aircraft in aerial combat plus 6 probables between August 1943 and February 1944, all while flying the F4U-1 Corsair. He remained in the Marines after the war and was killed while landing his Corsair at Ashburn Airport in Chicago on May 3, 1947.

For extraordinary heroism as Division Leader of Marine Fighting Squadron TWO HUNDRED FIFTEEN in action against enemy Japanese forces in the Solomon Islands and Bismarck Archipelago Areas, from 5 January to 15 February 1944. Intercepted by vastly superior numbers of enemy aircraft while flying escort for our bombers during strikes over the strongly defended Vunakanau and Lakunai Airfields on 20 and 26 January, Captain Aldrich fought gallantly against tremendous odds, immediately plunging to the attack and destroying four of the hostile planes. Returning from an escort mission deep in enemy territory, he and his wingman observed five Zeros attacking one of the pilots of his formation parachuting from a damaged plane and, hurling themselves at the enemy with a fury that balanced unequal odds, drove the Zeroes away, enabling the pilot to make a safe landing. Disregarding severe personal wounds and damaged inflicted on his plane during an escort mission over Tobera Airfield on 28 January, he continued the fierce engagement despite overwhelming aerial opposition and shot four hostile craft from the sky. Destroying a total of fifteen Japanese aircraft during this period of intense aerial operations, he contributed essentially to the protection afforded our bombers and his bold tactics and brilliant combat record reflect the highest credit upon Captain Aldrich and the United States Naval Service.