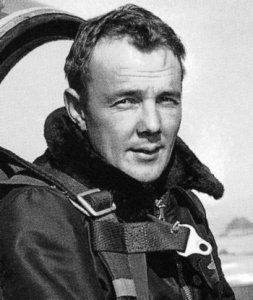 Don Adams was born on February 23, 1921, in Caton, New York. After graduating with a Bachelor’s degree from Western Michigan College in 1942, he entered the Aviation Cadet Program of the U.S. Army Air Forces on October 24, 1942, and was commissioned a 2d Lt and awarded his pilot wings on August 30, 1943. Lt Adams then served as an instructor pilot at Newport, Arkansas, from August 1943 to July 1944, followed by advanced fighter training in the P-51 Mustang. He went to England and joined the 343rd Fighter Squadron of the 55th Fighter Group in February 1945, where he was credited with destroying 2 enemy aircraft on the ground while strafing enemy airfields before the war ended. Adams transferred to the 307th Fighter Squadron of the 31st Fighter Group on occupation duty in Germany in November 1946, and then returned to the U.S. in June 1947. His next assignment was flying F-80 Shooting Stars and F-86 Sabres with the 62nd Fighter Squadron of the 56th Fighter Group at Selfridge AFB, Michigan, from July 1947 to October 1951. Maj Adams then deployed to Korea, where he was credited with the destruction of 6.5 enemy aircraft in aerial combat plus 3.5 more damaged while flying with the 16th Fighter Interceptor Squadron of the 51st Fighter Interceptor Group from November 1951 to June 1952. He joined the 27th Fighter Interceptor Squadron of the 1st Fighter Interceptor Wing at Griffiss AFB, New York, in July 1952, and was killed while flying an F-89 Scorpion near the Detroit Airport on August 30, 1952.

For gallantry in action against an armed enemy of the United Nations as a Pilot, 16th Fighter-Interceptor Squadron, 51st Fighter-Interceptor Group, FIFTH Air Force, on 3 May 1952. Leading a squadron of six F-86 type aircraft, Major Adams attacked a flight of twenty MIG type aircraft. In the ensuing battle, from 30,000 feet down to 5,000, Major Adams aggressively pressed the attack despite mechanical difficulties which resulted in sever frosting of his windscreen and rendered his sighting system useless. With an extraordinary display of airmanship and gunnery skill, Major Adams succeeded in destroying the flight leader of the enemy element. In succeeding maneuvers he observed a second aircraft and, unaware of the first destruction because of excessively reduced visibility, he attacked, believing this aircraft to be his first target escaping. Continuing his aggressive attack, he destroyed the second aircraft as well. The destruction of the two aircraft effectively broke up the enemy force. By his high personal courage, resourcefulness, and extraordinary flying skill, Major Adams reflected great credit upon himself, the Far East Air Forces, and the United States Air Force. 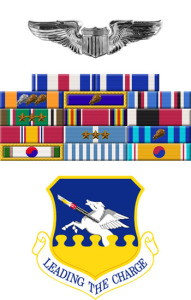