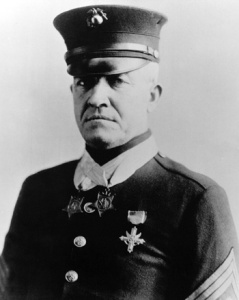 Dan Daly was born on November 11, 1873, in Glen Cove, New York. He enlisted in the U.S. Marine Corps on January 10, 1899, and was assigned to the Asiatic Fleet where he saw action in Peking, China, during the Boxer Rebellion in 1900, for which he would be awarded his 1st of 2 Medals of Honor. He served at Veracruz during the Mexican War in 1914, and saw action again and received his 2nd Medal of Honor during the Occupation of Haiti in 1915. During World War I, Daly was sent to France in November 1917, and saw action at the Battle of Belleau Wood in June 1918. He retired from the Marine Corps on February 6, 1929. Dan Daly died on April 27, 1937.

Serving with the 15th Company of Marines on 22 October 1915, G/Sgt. Daly was one of the company to leave Fort Liberte, Haiti, for a 6-day reconnaissance. After dark on the evening of 24 October, while crossing the river in a deep ravine, the detachment was suddenly fired upon from 3 sides by about 400 Cacos concealed in bushes about 100 yards from the fort. The marine detachment fought its way forward to a good position, which it maintained during the night, although subjected to a continuous fire from the Cacos. At daybreak the marines, in 3 squads, advanced in 3 different directions, surprising and scattering the Cacos in all directions. G/Sgt. Daly fought with exceptional gallantry against heavy odds throughout this action. 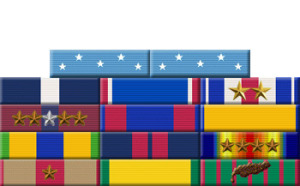