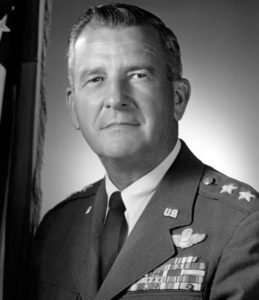 Brooke Allen was born on September 1, 1910, in Columbus County, North Carolina. He was commissioned a 2d Lt of Infantry through the Army ROTC program at Davidson College, North Carolina, on June 1, 1933, and joined the Flying Cadet Program of the U.S. Army Air Corps on June 20, 1933. Lt Allen was awarded his pilot wings at Kelly Field, Texas, in July 1934, and then served with the 9th Bomb Group at Mitchel Field, New York, from July 1934 to September 1939. His next assignment was as an intelligence officer with the 18th Bomb Wing at Hickam Field, Hawaii, from September 1939 to December 1940, followed by service as a squadron commander with the 5th Bomb Group at Hickam Field from January 1941 to January 1942. Col Allen served on the staff of 7th Air Force in Hawaii from January to March 1942, and then served as commander of the 42nd Bomb Squadron of the 11th Bomb Group in Hawaii from March to July 1942. During this time, Col Allen led his squadron of B-17 Flying Fortress bombers in four attacks against the Japanese Task Force during the Battle of Midway in June 1942. He again served on the staff of 7th Air Force from July to September 1942, and then took command of the 5th Bomb Group and led them in combat at Guadalcanal from October 1942 to August 1943. Col Allen returned to the U.S. in August 1943 and served on the staff of Headquarters 2nd Air Force at Colorado Springs, Colorado, until July 1945. He attended Command and General Staff School at Fort Leavenworth, Kansas, from August 1945 to March 1946, and then served as deputy commander of the North Atlantic Wing for Air Training Command at Westover Field, Massachusetts, from April to June 1946. His next assignment was as Chief of Staff to the U.S. Air Force Representative to the United Nations Military Staff Committee in New York City from July 1946 to May 1948, followed by service with Headquarters U.S. Air Force in the Pentagon from May 1948 to February 1951. Gen Allen was commander of the Air Pictorial Service in Washington, D.C., and Philadelphia, Pennsylvania, from February 1951 to August 1952, and then was chief of staff for the Military Air Transport Service at Andrews AFB, Maryland, from September 1952 to June 1954. Gen Allen served another tour at the Pentagon from July 1954 to March 1955, followed by service as commander of the Continental Division of the Military Air Transport Service at Kelly AFB, Texas, from April 1955 to July 1957. He was commander of the 6th Allied Tactical Air Force at Izmir, Turkey, from July 1957 to June 1959, and then served as commander of Headquarters Command at Bolling AFB, Washington, D.C., from August 1959 until his retirement from the Air Force on January 1, 1966. Brooke Allen died on May 30, 1992, and was buried at Arlington National Cemetery.

The President of the United States takes pleasure in presenting the Distinguished Service Cross to Brooke Empie Allen, Lieutenant Colonel (Air Corps), U.S. Army Air Forces, for extraordinary heroism in connection with military operations against an armed enemy while serving as Pilot of a B-17 Heavy Bomber and Commander of the 42d Bombardment Squadron, 11th Bombardment Group (H), HAWAIIAN Air Force, in aerial action against enemy Japanese Naval surface forces during the period 4 to 6 June 1942, at Midway. Lieutenant Colonel Allen led his squadron of B-17s in four attacks against the Japanese Task Force during the first two crucial days of the Battle of Midway. The gallant leadership, personal courage and devotion to duty displayed by Lieutenant Colonel Allen on this occasion have upheld the highest traditions of the military service and reflect great credit upon himself, the Hawaiian Air Force, and the United States Army Air Forces.