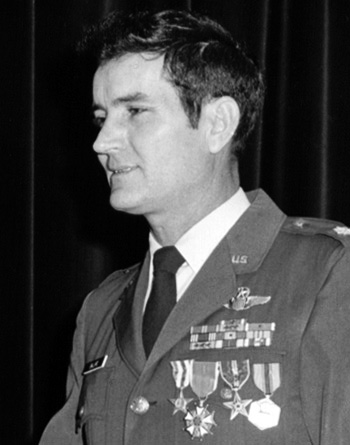 Ted Ballard was born in 1932 in Spartanburg, South Carolina. He enlisted in the Aviation Cadet Program of the U.S. Air Force on January 15, 1954, and was commissioned a 2d Lt and awarded his pilot wings at Greenville AFB, Mississippi, on June 1, 1955. After completing gunnery training in the T-33 Shooting Star and F-86 Sabre Combat Crew Training, Ballard was assigned to the 436th and then the 476th Tactical Fighter Squadron at George AFB, California, where he flew the F-100A & C Super Sabre and the F-104C Starfighter from January 1956 to March 1960. His next assignment was flying F-100’s with the 7272nd Air Base Wing at Wheelus AB, Libya, from March 1960 to March 1963. Capt Ballard then served as a Command Post Controller with the 4520th Combat Crew Training Wing, followed by F-105 Thunderchief Combat Crew Training, at Nellis AFB, Nevada, from April 1963 to August 1965. Ballard then flew F-105’s with the 44th Tactical Fighter Squadron at Kadena AB, Okinawa, from September 1965 to June 1966. He flew 68 combat missions with the 13th Tactical Fighter Squadron at Korat Royal Thai AFB, Thailand, from June 1966 until he was forced to eject over North Vietnam on September 26, 1966. After spending 2,351 days in captivity, Col Ballard was released during Operation Homecoming on March 4, 1973. He was briefly hospitalized to recover from his injuries at Andrews AFB, Maryland, and then attended Air War College at Maxwell AFB, Alabama, from August 1973 to August 1974. Col Ballard remained on the faculty of the Air War College until his retirement from the Air Force on July 31, 1975. After his retirement from the Air Force, Ted taught Air Force Junior ROTC at Gaffney High School in Gaffney, South Carolina, for 22 years. Ted and his wife Ruth had one child together, Kevin (27 October 1959 – 6 May 2009).

This officer distinguished himself by gallantry and intrepidity in action in connection with military operations against an opposing armed force while a Prisoner of War in North Vietnam. Ignoring international agreements on treatment of prisoners of war, the enemy resorted to mental and physical cruelties to obtain information, confessions and propaganda materials. This American resisted their demands by calling upon his deepest inner strengths in a manner which reflected his devotion to duty and great credit upon himself and the United States Air Force.