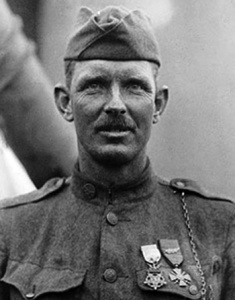 Alvin York was born on December 13, 1887, in Pall Mall, Tennessee. He was drafted into the U.S. Army on June 5, 1917, and was assigned to Company G, 328th Infantry Regiment, 82nd Infantry Division at Camp Gordon, Georgia. He served in France during World War I, and was later awarded the Medal of Honor for actions during the Meuse-Argonne Offensive on October 8, 1918. After serving with occupation forces, he returned to the United States on May 29, 1919, and received an honorable discharge from the Army. Between the World Wars, Alvin founded the Alvin C. York Agricultural Institute in Jamestown, Tennessee. He tried to re-enlist in the Infantry at the beginning of World War II, but was turned down due to his age. He then helped create the Tennessee State Guard and served as Commanding Officer of the 7th Infantry Regiment in Tennessee during the war. He married Gracie Williams on June 7, 1919, shortly after returning from Europe after World War I, and they had seven children together. Alvin York died at the Veterans Hospital in Nashville, Tennessee, on September 2, 1964, and was buried at the Wolf River Cemetery in Pall Mall, Tennessee.

After his platoon had suffered heavy casualties and 3 other noncommissioned officers had become casualties, Cpl. York assumed command. Fearlessly leading 7 men, he charged with great daring a machinegun nest which was pouring deadly and incessant fire upon his platoon. In this heroic feat the machinegun nest was taken, together with 4 officers and 128 men and several guns.