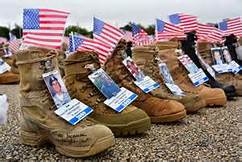 On 5 November 2009, 13 people are killed and more than 30 others are wounded, nearly all of them unarmed soldiers, when a U.S. Army officer goes on a shooting rampage at Fort Hood in central Texas. The deadly assault, carried out by Major Nidal Malik Hasan, an Army psychiatrist, was the worst mass murder at a U.S. military installation.

Early in the afternoon of November 5, 39-year-old Hasan, armed with a semi-automatic pistol, shouted “Allahu Akbar” (Arabic for “God is great”) and then opened fire at a crowd inside a Fort Hood processing center where soldiers who were about to be deployed overseas or were returning from deployment received medical screenings. The massacre, which left 12 service members and one Department of Defense employee dead, lasted approximately 10 minutes before Hasan was shot by civilian police and taken into custody.

The Virginia-born Hasan, the son of Palestinian immigrants who ran a Roanoke restaurant and convenience store, graduated from Virginia Tech University and completed his psychiatry training at the Uniformed Services University of Health Sciences in Bethesda, Maryland, in 2003. He went on to work at Walter Reed Medical Center in Washington, D.C., treating soldiers returning from war with post-traumatic stress disorder. In May 2009, he was promoted to the rank of major in the Army, and that July, was transferred to Fort Hood. Located near the city of Killeen, Fort Hood, which includes 340 square miles of facilities and homes, is the largest active-duty U.S. military post. At the time of the shootings, more than 50,000 military personnel lived and worked there, along with thousands more family members and civilian personnel.

In the aftermath of the massacre, reviews by the Pentagon and a U.S. Senate panel found Hasan’s superiors had continued to promote him despite the fact that concerns had been raised over his behavior, which suggested he had become a radical and potentially violent Islamic extremist. Among other things, Hasan stated publicly that America’s war on terrorism was really a war against Islam.

In 2013, Hasan, who was left paralyzed from the waist down as a result of shots fired at him by police attempting to stop his rampage, was tried in military court, where he acted as his own attorney. During his opening statement, he admitted he was the shooter. (Hasan had previously told a judge that in an effort to protect Muslims and Taliban leaders in Afghanistan, he had gunned down the soldiers at Fort Hood who were being deployed to that nation.) For the rest of the trial, Hasan called no witnesses, presented scant evidence and made no closing argument. On August 23, 2013, a jury found Hasan guilty of 45 counts of premeditated murder and attempted premeditated murder, and he later was sentenced to death for his crimes.